Medical Tourism - Is It OK?

(I would call this post “How to use hospital tourism and instead get in the hospital a misdiagnosed illness or no accurate diagnosis at all “).

We currently live in a world literally everywhere entangled in piezoelectricity. These are also ultrasonic installations of private security companies, which everywhere spy on and eavesdrop on clients and their neighbors, wound and kill with ultrasonic powerful radiation. It was already confirmed a year ago publicly by Italian virologists that the coronavirus is a very primitive virus and is not capable of killing at all. So why, then, do people die in terrible agony and are credited with being dead because of the covid-19 virus?

We live in a hugely sold world (exactly like that – sold under various contracts, for example, for the private security of objects). The fact is that private security guards have infiltrated almost all social structures and constantly replenish their databases (and they certainly have them, it is enough just to seriously delve into this case by the legal authorities). These data allow criminals (of course, this does not mean the entire private security service, but only those of its representatives who have strayed from the legal path) to build whole global frauds in order to extract money not only from individual citizens, but as we now see, even from superpowers like the US and the EU. But why is this possible and what is really happening around us?

I think that our world can be imagined as a huge oak tree, in which, however, tiny bugs have settled, which constantly perforate it from the inside, gradually turning it into a huge accumulation of rotten wood.

For example, General Cavi FROR 450V – 750V piezoelectric cables installed and used in a criminal manner (the manufacturer allows their use only for a few hours during public events) can cause disastrous effects on life and the environment. Instead they are installed everywhere and permanently by private criminals for the purposes of destruction and extortion.

Here is a photo of a General Cavi cable that has been shown to cause disastrous effects all around when used at full power. Its description in the company brochure follows the photo. 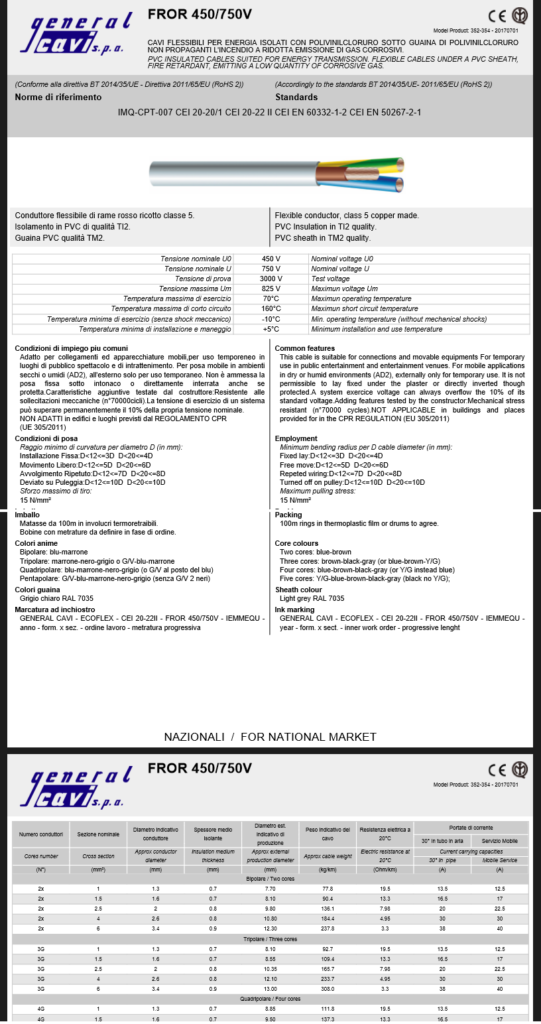 This example is not without reason. The fact is that high-voltage ultrasonic radiation (or in other words, vibration), which is dangerous for the whole world, is capable of causing a wide range of damage to the animal organism and the environment.

In the case of the human body, criminals widely use small perforations in biological tissues, brain and bones, turning the body from the inside into a rotten oak tree. The fact is that the ulcers resulting from the perforation of the body, both external and internal, including bone tissue, heal very poorly. This is because perforation is a process in which normal microbial contamination does not occur. As a result, the animal organism does not know how to treat these ulcers, and they can exist for years, especially in the internal tissues of the body and in bone tissues.

If the bombardment with dangerous high-voltage ultrasound occurs constantly, then diseases such as osteoporosis, ulcers of the stomach and internal organs, Alzheimer’s and Parkinson’s morbidity, dementia, heart failure as a result of damage to the heart muscles and a huge number of other ailments quickly arise and progress. These are not natural caused by natural factors diseases, but rather ailments caused by powerful artificial vibrational radiation. Perforating the lungs, for example, leads to internal bleeding within the lungs themselves and, as a result, to blockage of the alveoli, as a result of which a person can quickly die from a lack of oxygen in the body (suffocate).

In general, natural occurrence of high-voltage vibration radiation is possible in nature as a result of the friction of huge rocks during earthquakes, but this is of a general nature and often leads to the emergence of deserts. We are talking here about a criminal purposeful aggression against selected people for various reasons, with the aim of either destroying their health or family and relationships with the outside world, or with the aim of direct silent murder, as is now happening massively all over the world, depending on the countries.

The world population is not ready to resist this not new for a long period of time phenomenon (it is at least 400 years old), and its inaudible nature and lack of training of the population to recognize ultrasonic aggression lead to the fact that no one helps law enforcement agencies to fight this very insidious in society phenomenon. Suffice it to say that a hundred years ago in Russia, an uncontrolled social upheaval took place with the help of high-voltage ultrasonic radiation from large piezoelectric installations  in the country (and it was called October 1917 revolution), and it was not naturally matured democratic revolution, and can be compared with a political and social earthquake. Whole vital social classes and structures were military cancelled, since about 90% of the population was represented by oppressed peasants, illiterate and uneducated in the life, and with the help of their imprudent participation, the Russian society, which at that time occupied the first position in the world as a superpower ( also for gold mining), was literally squandered and ruined. The introduction of electricity and piezoelectricity by the end of 19th century in the Russian Empire allowed ultrasonic conspirators to literally drive the population to become crazy, provoking an unprecedented civil war, which erased and scattered all over the world the most important for Russian society economic groups, who skillfully represented and defended the interests of the Russian Empire throughout the world.

Now something very similar is happening, but with other countries and powers, since normal tourism has been turned by ultrasound criminals into hospital tourism under the watchful eye of the same criminals who have also been officially introduced into hospital structures.

We need to drive them out from everywhere, and then may be our little earthly world will become much happier.

And one need to stop hospital tourism. This is possible only with a complex system of interaction of the justice system with the health care system and with the citizens themselves.

But living organisms also work thanks to the electricity present within them and created by the accumulation of solar energy.

The overload of biological organisms with electricity thanks to the piezoelectric phenomenon leads to the instability of the organisms exposed to this hidden violence and in the case of widespread use of this phenomenon against the entire population – to the creation of extreme instability of an entire exposed country.

Government instability is the most important sign of this social phenomenon.

In order not to become a hospital tourist, enlighten yourself, ask who in your environment is fond of placing ultrasonic traps for making dirty money. The local police and state sanitation agencies can help you very seriously with this. Your health should be in your hands. Preventing the onset of the disease is the best treatment and is not as expensive as the unnecessary treatment of the developed itself disease. After all, rotten wood is very difficult to restore, almost impossible. Now, however sad it is to state, it is the hospital structures that are very strongly encircled by high voltage piezoelectric cables attached to ultrasonic control panels … These are our times … Do not rush to the hospital if, in general, somehow you do not feel so normal. Instead, talk to local police … Be a tracker in your own housing complex. It will return a hundredfold to you and your family and friends!

Did you find this article interesting? Did it help you to see better this phenomenon hidden from normal eyes? Will the unique information read here help you better to protect your health and well-being, as well as that of your loved ones and friends, and to avoid invisible ultrasound harassment? Now you will be able to better understand and assess the situation with health and well-being.

Subscribe to our newsletter, do not miss the opportunity to be consulted on important aspects of health!

Read other articles about ultrasound on our website. Some of them contain unique information.